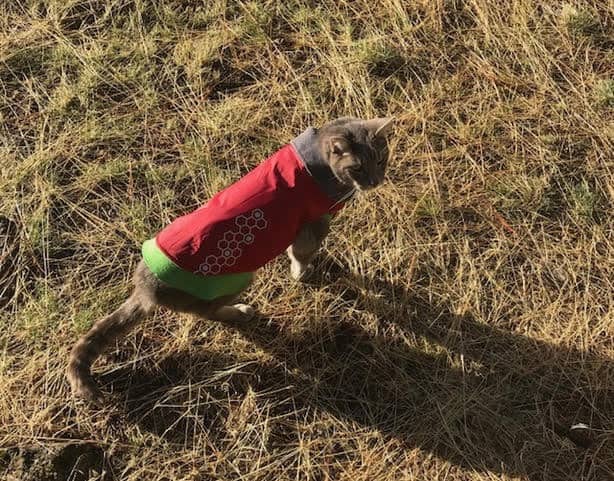 11 Jan The Story of Henrykitty

Posted at 14:49h in Uncategorized by anne 0 Comments
0 Likes

HenryKitty is a patient that got to know just about every vet and staff member during his long stay at the Animal Emergency Center. A terrifying tale familiar to many pet owners, Henry went missing for nearly a week and was found in critical condition. It was a tumultuous journey for his family, but we are thrilled today have them share with your their story, happy ending included.

In April of 2017, my husband and I moved from Atlanta, Georgia to Bend, Oregon. We made the week-long drive with our two cats, Henry and Gracie. We were dreading the car trip, expecting them to meow the entire time. But to our surprise, they actually seemed to enjoy traveling with us. As long as we were with them, they were happy. They even played and snuggled when we made our stops in different hotels along the way.

When we arrived in Bend, we decided to be very cautious about letting the cats outside because we didn’t know the area well and had no idea what sort of wildlife we’d find near our new home on the Oregon Central Canal.

We only allowed them outside when we were with them and kept them on a harness and leash to walk them around allowing them to become familiar with their surroundings. But very quickly, they seemed comfortable in their new home and seemed to prefer to stay in our fenced in backyard.

As forth of July weekend approached, we again decided to be cautious and keep the cats inside during the holiday, as we didn’t know what kind of fireworks there would be, or if they would be close by. But, on the morning of July 3rd, we couldn’t find Henry and he didn’t come home when we called him.

We searched everywhere calling and shaking the treat bags, but he didn’t come home. We frantically tried to find him before the fireworks started, but tourists had filled the town and were already setting off fireworks. One family in a camper, drove down to the end of our street and set off fireworks at 10 o’clock at night with all their small children in the street and fireworks shooting off in all directions towards the houses, the fields of dry grass along the canal, and up into the ponderosa pines between the homes.

For six days we searched with temperatures averaging 95 degrees in the middle of the day. We left flyers with his picture within two square miles of our home, at the post office, and in nearby shops. We noticed the vet offices and the animal shelter. I visited the animal shelter every day hoping someone would bring him in, but he wasn’t there.

I remember sobbing one afternoon when it occurred to me that if he was still alive, he would soon be so dehydrated that he wouldn’t survive. That night, we walked along the canal and between some new home construction in our neighborhood, calling and shaking the treat bag. He was nowhere to be found. I refused to give up and circled around the three streets near my home and asking neighbors if they’d seen them and handing out more flyers.

When I turned to walk back home, I came up the side of a newly built home where the landscaping had just been completed but the owners hadn’t moved in yet. Out of the corner of my eye, I saw a shape that looked like Henry sitting on the front porch. I wouldn’t allow myself to get my hopes up, because I thought at that point my eyes were playing tricks on me. I rounded the corner of the house and walked to the porch, and there sat Henry, but when I called to him, he didn’t look up or respond. He seemed stunned.

I walked over and scooped him up in my arms, rushed him into the house and checked him for injuries, there were none. He wasn’t bleeding or wounded, but he seemed lethargic and unaware of me, so I rushed him to The Emergency Animal Clinic, which was just 3 minutes drive from my home.

At the clinic, they determined that his dehydration was so severe, that if he didn’t have fluids immediately, he may be at risk for renal and liver failure. Once IVs were started overnight, it was discovered that even though he had no visible wounds, he had taken a hit (a possible fall) to the chest that had separated his sternum from his ribs and developed an infection throughout his abdomen.

During the night, as his fever climbed, Dr. Stanley did surgery to clean the abdominal infection and within 48 hours, he came home to start his recovery with a feeding tube inserted through his nasal passage and an IV line in his front left leg.

By the time he began to recover, his fever returned and he began to have fluid build up under his right lung and he struggled to breathe. Again, at midnight on the third day of his stay in the emergency clinic, he was prepped for surgery to clear more infection in his abdomen and drain fluid that created pressure on his lungs.

When he came out of surgery, he was on oxygen and came home the next day. But the fluid continued to build and the fever kept him uninterested in food or water. By the time 4 days had passed, the feeding tube in his nasal passage began to become infected and it became harder for him to breathe through his nose. The nasal tube had to be removed and replaced by an esophageal feeding tube. The anesthesia required for this again caused him to struggle to breathe and he had to be put on oxygen again.

We waited for 24 hours, not knowing if his breathing would return to normal and too far from Portland for him to make it to a lung specialist. But soon his swelling subsided and his breathing improved enough for him to come off oxygen. After the second surgery, the infection was finally cleared and his temperature also began to return to normal and we brought him home to rest.

However, in the middle of the night, he began to struggle to breathe with his mouth open and we realized that although his abdominal infection was clear and his lung swelling was down, now his nasal passage was fully inflamed and infected. The nasal discharge crusted hard over his nostrils and had to be cleared with steam and a warm cloth. For three more days, we continued to use steam and warm damp compresses to clear his nasal passages. We refused to give up. With the support of our vet and their entire office, as well as the entire team at The Emergency Animal Clinic, our HenryKitty made a slow and difficult recovery.

Without the immediate action of The Emergency Animal Clinic, our HenryKitty would not have survived. They had layer upon layer of challenges with Henry’s recovery, many of which were faced in the middle of the night. The entire team at The Emergency Animal Clinic devoted gentle, thoughtful care to Henry and never gave up hope of saving him. We want to thank everyone who contributed to his care and recovery and let you know how grateful and happy we are to have our little family back together and enjoying our new home in Bend. Henry still gets cold easily but has gained back his weight. He wears a sweater and jacket for his very supervised walks outside. Here he is trying on his new sweater at Mud Bay.